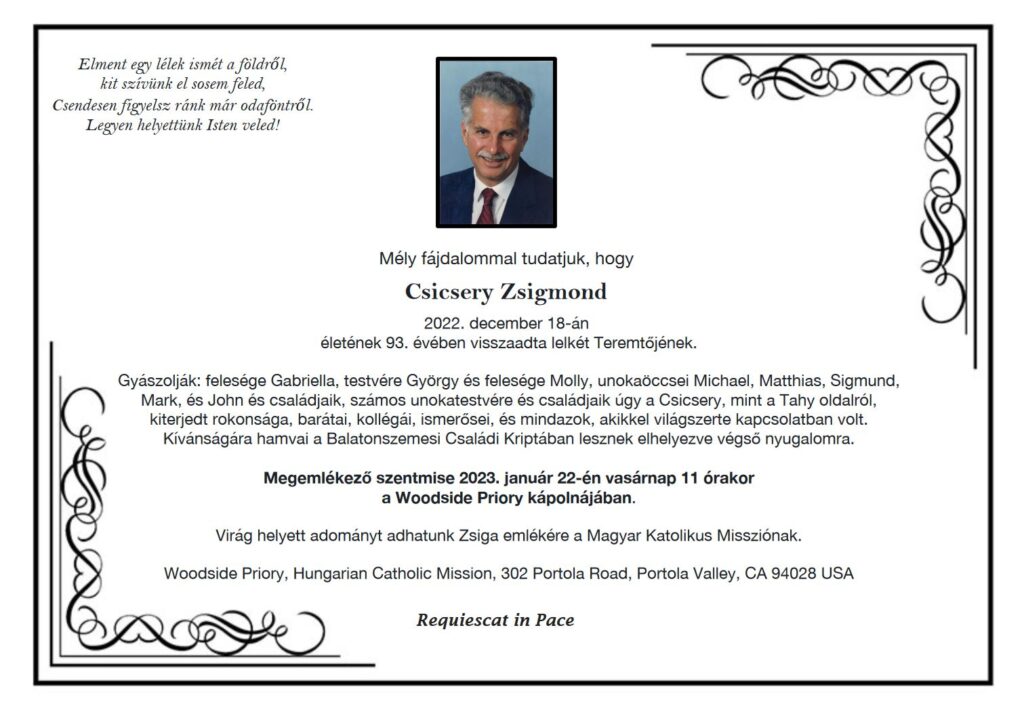 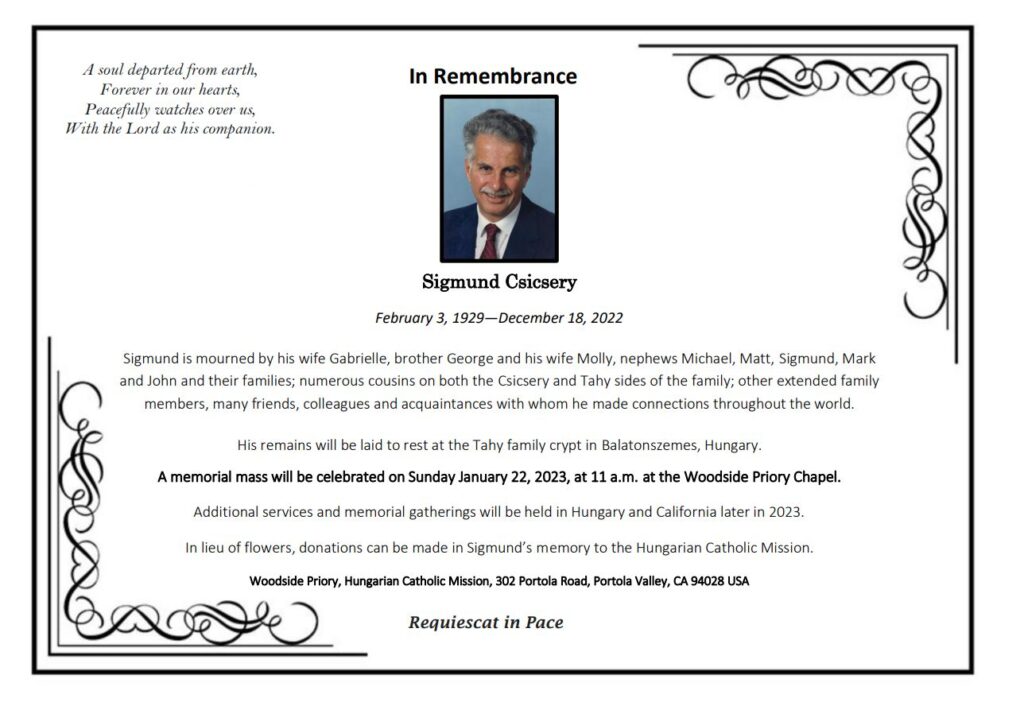 A renowned pioneering chemist in the field of catalysis, Sigmund Csicsery led a life full of adventure that he documented in meticulous detail. His path led through harrowing experiences as a cadet trying to survive World War II in Europe, imprisonment as a student in communist Hungary, and escape during the 1956 Hungarian Revolution. His second life, based at his new home in California, was crammed with an unquenchable thirst for exploration. His encyclopedic knowledge extended to history, ethnography, geography, art, and classical music. No museum was spared, no mountain unclimbed. Sigmund’s appetite to know and experience the world left the average mortal dazed. His eternal curiosity and interest in all things natural and man-made accounted for his longevity.

Sigmund Csicsery was born in Budapest, Hungary, in 1929. After four years of study at the Premonstratensian gymnasium in Kassa (Košice), he enrolled at the Gábor Áron Cadet School in Nagyvárad (Oradea). In January 1945, the school was relocated to northern Germany to avoid the approaching Soviet Army. After continuing schooling in Eger (today Cheb in the Czech Republic), he and his fellow cadets were captured by American forces, becoming POWs. Six months later, they were released, and Sigmund returned to Hungary to resume his studies, graduating from Sándor Petőfi High School in 1947.

In 1951, he received the equivalent of a master of science in chemical engineering at the Technical University of Budapest. He worked at Forte, a photochemical plant in Vác, for a year. Because he had been an American POW, the communist government classified him as a class enemy, and he was sentenced to forced labor. A year later, the AVO (the secret police) arrested him. After a few months of torture in an AVO prison, he was transferred to work in a coal mine. He was paroled during the summer of 1954. The Budapest Military Court issued a total exoneration in 1990.

Sigmund took part in the 1956 Hungarian Revolution against Soviet rule. After the Red Army crushed the revolt, he fled to the United States with his fiancée, Gabrielle. He worked for two years at Monsanto’s research laboratory in Dayton, Ohio, then moved to Evanston, Illinois, where he studied at the Ipatieff Laboratory of Northwestern University under Professor Herman Pines from 1959 to 1961, earning his doctorate in organic chemistry. From 1961 until 1986, he worked for Chevron Research Company in Richmond, California, where his last title was senior research associate. He was president of the California Catalysis Society and director of the North American Catalysis Society. In December 1956, he became a member of the American Chemical Society. In 2001, he was admitted to the Hungarian Academy of Sciences.

After retiring, Sigmund became a consultant in numerous areas of his field of expertise in chemistry: catalysis, the synthesis application, and the marketing of molecular sieves as catalysts, environmental catalysis, and petroleum and petrochemical processing. His clients included the Jet Propulsion Laboratory (JPL), SRI International, Catalytica Associates, and The Catalyst Group in the United States; ENICHEM and ENIRICERCHE in Italy; Neste Oy in Finland; the United Nations Industrial Development Organization (UNIDO); and many other companies in the United States, India, Asia, Africa, Europe, and South America.

Sigmund was an expert in heterogeneous catalysis; petroleum chemistry and processing; the synthesis, characterization, and use of molecular sieves; shape selective catalysis; and catalyst testing. His most important accomplishments include the discovery of restricted transition state type shape selectivity (the nonobvious type of three types of shape selective catalyses), the invention of dehydrocyclodimerization (the reaction converting C3-C5 paraffins to BTX aromatics), and the implementation and completion of a five-year UNIDO/UNDP project at the National Chemical Laboratory of India on the development and commercialization of zeolite catalysts that proved so successful that it received the United Nations’ prestigious Centre of Excellence award. He had over 50 publications and 27 patents and was frequently invited as a plenary speaker at national and international conferences. He taught catalysis at several universities and lectured at academic and industrial research institutes in more than 20 countries.

In recognition of the English translation of his 1945 diary, Almost a Soldier, Sigmund was awarded the 2011 Árpád Academy Gold Medal by the Szent László Rend, an international organization founded in Cleveland, Ohio, in 1951. This award is presented to Hungarians and their descendants living outside of Hungary in recognition of scholarly, scientific, literary, and artistic achievements promoting the spirit and knowledge of Hungarian culture. In 2017, he published a memoir, All That I Saw.

In 2001, the Budapest Technical University Chemical and Biotech Division awarded Sigmund its Gold Diploma, and in 2021, he received the university senate’s Rubindiploma in recognition of his significant scientific contributions. In the same year, the NOVOFER Foundation presented him with the prestigious Gábor Dénes Prize for lifetime scientific achievement and innovations.

Sigmund met his wife, Gabrielle, in 1953, and they were together for the rest of his life. Together they left Hungary during the 1956 Revolution and came to the United States, where they started anew. While exploring the world, Sigmund remained fiercely devoted to maintaining family ties, however remote, and to upholding his Hungarian heritage.

Sigmund lived at home in Lafayette, California, until 2021. He spent his last days at an assisted living community in Moraga, California, in the company of Gabrielle. He will be missed by her; his brother George and his wife, Molly; his nephews and their children; dozens of cousins and their families; and the many friends and colleagues he came to know around the world.

Donations can be made in Sigmund’s memory to
the Hungarian Catholic Mission.